It’s funny that today, of all days, I have several links about volcanic eruptions and Iceland appearing in my Twitter feed. Examples include:

Iceland volcano could erupt ‘tomorrow or in 5 years’ so best policy is to find ways to minimise flight disruption (£) thetim.es/16dycNv

I’d added a link to the IAVCEI safety guidelines for working/hiking on volcanoes to today’s post. See them here: iavcei.org/documents/safe…

Maybe I should start following the Icelandic volcanoes on Twitter, too (yes, volcanoes exist on Twitter!). There are tweets coming from @HeklaVolcano, @KatlaVolcano, @Eyjafjalla, @Eyjafjallajokul, @grimsvotn, and even @theashcloud. But, there is no time to turn back now! It’s off to Iceland!

So, how does one spend their time on a flight to Iceland? My first flight was only one-and-a-half hours, which didn’t leave me much time to work on the computer (by the time I can turn on my “portable electronic devices” and then have to power them down for landing). I decided to dive back in to a book I read some years ago to immerse myself in some Icelandic history (of course, the book was on my Kindle, so I had the same power challenges). For those of you that have not read John McPhee’s Control of Nature, I strongly encourage you to read this nonfiction account of three attempts by humans to control natural processes. Written for a general audience, one of the book sections details how in 1973 the residents of Heimaey, Iceland, saved their harbor by spraying water on the volcanic lava flow threatening to close it off. If you do not have quick access to the book, check out the Google Earth summary of the text in a geospatial context, available on the Pennsylvania Earth Science Teachers Association (PAESTA) website and designed by Sara Neville, Penn State Brandywine alumna. Below is a short video clip that summarizes the eruption event.

My goal for the second flight, from Boston to Keflavík International Airport (Iceland’s main airport) was to get some sleep! I knew I was going to land at 6:30AM Reykjavík time, which is four hours ahead of Philadelphia – meaning, it would feel as if it was 2:30AM for me. Yikes – that’s not a good time of the day for me to be functional, but I had no choice – I had to get off the plane, exchange some currency at the airport, catch a shuttle to my hotel, and get ready to meet my group in a few hours to start our short course.  I was so lucky the hotel let me check in to my room at 8AM (thank you, Fosshotel Lind!).  I was able to grab a quick shower and some breakfast (the hotel has a free breakfast buffet every morning).  I’m now getting ready to join the group to start with an orientation to the city! 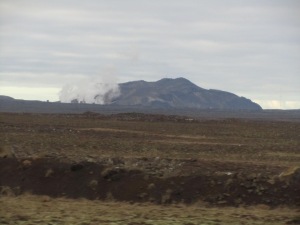 Not the best photo (but it was taken out of the window of a moving bus). My first glimpse of basaltic fields as far as the eye can see, and perhaps a geothermal power plant in the distance!

Starting #SciArtFriday by cutting fabric for a new @joides_resolution #EXP390 quilt. I’ve never focused so much on cutting! The fabric is Three Cats/Da Gama Textiles that is made in South Africa & where I purchased it post-expedition. No room for errors - it’s a long way to get more! (unless @clairerouty wants to go with me to Cape Town again! 😂)
Dropped these winter hats off at the @psu_bw_socialimpact center today. So glad that my de-stressing #crocheting can provide some winter gear for campus students (but 7 hats made in the past month - eek! It’s been an interesting start to the semester….)
I like to celebrate the small victories… like sewing a zipper for the first time! I took a class today at #vikingsewinggallery and made a pillow with a hidden zipper. Oh, the future possibilities….
I'm excited to share the first quilt in my new mini quilt collection. It is a celebration of the Endangered Species Act, which turns 50 this year. I'll be restarting #FrontDoorScience this year to share a new quilt each month with those walking through the neighborhood. I'm starting with this one (& thanks to @legalquilts for picking up the center fabric for me while I was out to sea! It is serving as the inspiration for the collection.). To learn more about this quilt, click on link in bio.
Excited to be a part of the 2023 Penn State Writing in Integrated Studies Faculty Training Program. This book is the framework for the discussions - can’t wait to dive in and do more with my classes!