Each summer, my husband and I try to get to a national park we’ve never been to before (our goal is to try to get to as many of the natural national parks as we can). For Summer 2018, I let my husband select the park we would visit. He said he really wanted to go to Grand Canyon National Park. Although I’ve been to the Grand Canyon a few times in the past, I was thrilled to be able to share with him his first encounter with this geologic wonder.

This post will not go over the geology of the Canyon, or share our disappointment in seeing the smoke and evening glow from the fires along the North Rim, or our excitement at seeing two California condors flying in the Canyon. Instead, I’d like to share an interesting piece of history about the early female tour guides.

The Fred Harvey Company was a hospitality service company founded in 1876 that set up a chair of hotels, restaurants, and other services along railway routes in the western United States. The company was known for their “Harvey Girls,” young women that were trained and of “good character” to serve as waitresses at the Harvey restaurants. There was even a movie musical made in 1946 starring Judy Garland and Angela Lansbury titled Harvey Girls.

While touring The Fred Harvey History Room in Bright Angel Lodge on the Grand Canyon South Rim, I saw this display case of a woman’s uniform and interesting description of a Fred Harvey Company, Indian Detours. The information on the sign was a “wow” moment for me:

I was excited to read that in 1926, women with geology degrees were hired to lead tours and be interpreters of the southwest. This was the uniform they wore. 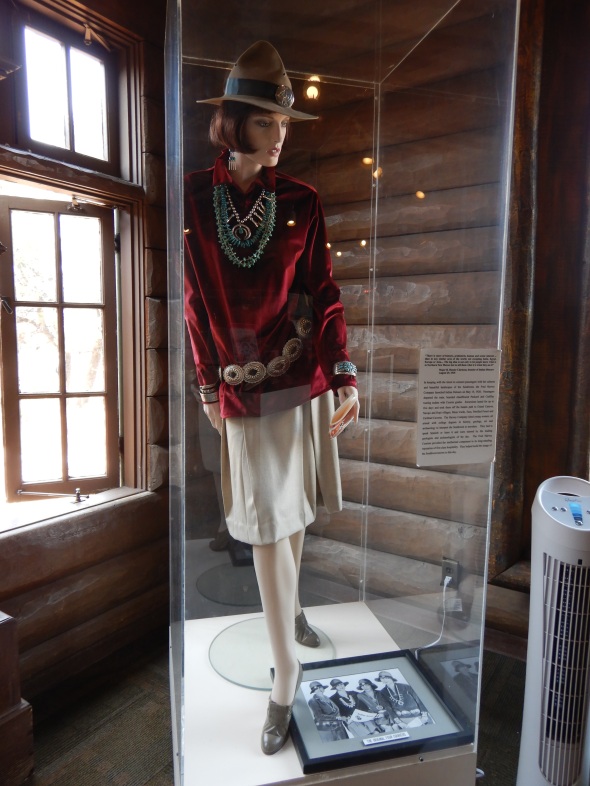 Yay to the women geologists that worked as Fred Harvey Couriers!

One other interesting historical piece I learned… when the stone wall was being constructed along the South Rim, one of the masons was in love with one of the Harvey Girls (keep in mind all Harvey Girls were required to be single). To get her attention, this mason carved a heart-shaped rock and placed it in the wall. Amazingly, I was able to find the heart! I think the heart does a great job capturing my own love for the Grand Canyon and respect for the women geologists that served as Harvey Girl interpreters.

Today was the first day of a "Sustainability in Our Curriculum" workshop. From now through May, I'm with a cohort of faculty in Penn State's College of Earth & Mineral Sciences (@psu_ems) to develop sustainability-related curriculum for our EMS courses. I look forward to working with others for new ideas, perspectives, and resources to address areas that I need to develop further for my students.
For February, I made a mini-quilt for my front door I’ve titled I HeART Earth Science. It represents both my identity as an Earth scientist and the creative way I communicate science. The big read heart in the middle represents not just my heart for my work and where my creativity originates, but Planet Earth. The green and blue batik fabrics around the heart represent land and water, the Earth systems of hydrosphere, biosphere, atmosphere, and lithosphere - the complex systems that interact with each other and provide the foundation for the living and non-living components of our environments.
Beautiful/chilly day to get out for a walk - or, to finally get the car out for a drive! (until tomorrow’s snow...)
In the month of January, I gave the walkers in my neighborhood something different to look at each day - a growing record of weather comparisons! For my January 2021 #SciDoor, I crocheted a temperature record of the maximum daily temperature recorded in this area from 50 years ago, and compared that value to this year. Slowly, day-by-day, I built out the record of comparing temperatures (left side is 1971, right side is 2021), with row 1 being the data for January 1st, row 2 representing the temperature data for January 2nd, etc. It was a fun way to start the day each morning, crocheting a row at a time!
Watching a live kitchen chemistry demonstration led to making heart-shaped cookies (and more!) for this weekend’s Valentine’s drop off at Riddle Hospital for @cookies_for_caregivers