This is one of a series of blog posts on the Journeys of Dr. G blog for the 2015 AGU Fall Meeting. Feel free to read my posts for pre-meeting, Sunday, Monday, Wednesday, Thursday, and Friday.

The AGU Fall Meeting has certainly come a long way! As of Tuesday morning, there were 24,304 people in attendance, representing 116 countries. As the President of AGU shared in a short speech on Tuesday, “You make such a difference in the world.” I have to say that Tuesday was probably one of the most (if not THE most) unique days I’ve ever had at an AGU meeting. I had a conference call in the morning with a committee I am on at Penn State, so I didn’t arrive at the convention center until approximately 9AM. I knew that Elon Musk (yes, THE Elon Musk) was going to be a keynote speaker that morning at 10AM, and that there would probably be a line for entry. But the length of the line even one hour before was insane! It went from Moscone North (where he was going to speak) down through the underground connecting hallway to Moscone South, through the poster hall, then wrapped back around and down the hallway again to Moscone North! Some people estimated that there were over 3,500 people in line!

Certainly, the room for his talk held ~2,500 people, and every seat was taken (others had to head to the overflow room to hear the talk live, or watch it streaming online). Several comedic tweets resulted from just standing in line!

#AGU15 Tougher problem than climate change: getting a seat for Elon Musk's talk.

But I was able to make some new friends during this shared experience, and had no problem getting a seat in the venue. I blogged over at my AGU GeoEd Trek blog if you would like to read more about the event and browse through the Storify I created from the live tweeting.

I then zipped through the Exhibit Hall to check out the vendors, caught a talk by one of my friends, and headed over to the Sharing Science In Plain English Panel and Lunch. I always look forward to hearing more about effective ways scientists can be better at sharing their work with non-scientists. Then, after a fabulous post-lunch meeting with my AGU Meeting Undergraduate Mentee Kimberly, it was off to look at posters and then get ready for the blogging panel!

As a blogger for AGU, I’m asked to serve on a panel they run each year for people interested in learning more about communicating science through blogging, Facebook, Twitter, etc. I served on the first panel with Mauri Pelto, the author of From a Glacier’s Perspective blog at AGU, and Aries Keck, the social media manager at NASA Goddard. The discussion was helpful (I hope!) for the ~80 audience participants, and they asked some really great questions. But we had some fun, too! Aries says that she wants to do something (on social media) that would get Kim Kardashian to stop and look at it. She said she also will watch the Oscars and tie in NASA tweets with hashtags that appear during the event (what a great strategy!). Mauri said that he had a tweet with a graph of glacial data, he received about seven likes. When his daughter added an image to that graph and retweeted it, she received over 40,000 likes – and a retweet from Leonardo DiCaprio! Aries shared an important note that social media is now driving traditional media.

My final event of the night was the Open Mic, where scientists show off their talents of varying levels through poetry, story telling, comedy, and music. It is only at this event where you can hear a poem about the IPCC climate report, a song about composting, and see someone play a pink ukulele (that would be my AGU science communication mentor, Esther!). The event is in its 5th year and was hosted by Penn State geoscientist Richard Alley.

Wednesday is another big day for me at AGU. I’m chairing a lunchtime Town Hall session on undergraduate research, will be attending a climate change communication workshop, and spending the evening at the Ignite@AGU NASA event. 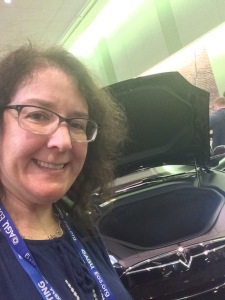 But I have to leave you with one more item… one of my students requested I get a selfie with Elon Musk. There was no way I was going to get even close to Elon, but I did get to sit in the Tesla he brought with him!

I'm thrilled to be exhibiting my quilts and crocheted pieces at @jagardens, starting this weekend! It will be the first time my Drawing Down Towards Climate Solutions mini-quilts, plus my Stitching Hope for the Louisiana quilts, PLUS my crocheted temperature data will all be on display at once. For those in southeastern PA, I hope you are able to come out sometime before January 8 to stroll the beautiful arboretum and stop by the art gallery to view these pieces. Admission to the arboretum and gallery is free!
Finished this fun data visualization/quilt top that shares the daily Sky Cover measurements from @joides_resolution #EXP390. As sky cover is recorded in units zero to eight, I chose eight different batik fabrics to represent the scale (the deepest blue batik for the blue sky, and the darkest/black batik for when the sky was completely clouded over, and all shades of blue/grey in-between). As the expedition officially was April 7 thru June 7, 2022, there are 62 pieces of data/batik strips. The background fabric is filled with golden stars for the sky, and the bright gold border is my nod to our port city, where the fabric was purchased.
Thank you @SciHistoryOrg for hosting Start Talking Science 2022 - so great to be able to present alongside other Philly scientists about the work we do to a non-STEM audience of all ages! And a great opportunity to share the mission and how we do science at sea on @theJR #EXP390 #EXP393
Back at @pennlivearts this evening to hear the @blindboysofalabama - so incredible, so inspirational! The new songs were great, but my all-time favorite will always be Amazing Grace sung to The House of the Rising Sun (check it out if you have never heard this innovative mashup).
🎼 I love live New Orleans jazz - and tonight, I didn’t have to go to New Orleans, as the jazz came to me! 🎶 Such a fun concert by @newbreed_brassband. 🎵 The best part - the sousaphone player’s high school band teacher was there & brought his trumpet on stage and joined them for a few songs. 🎺 After the first song, he said he was getting emotional, as he was so proud of the group. I get it, teacher, I’m there with you.