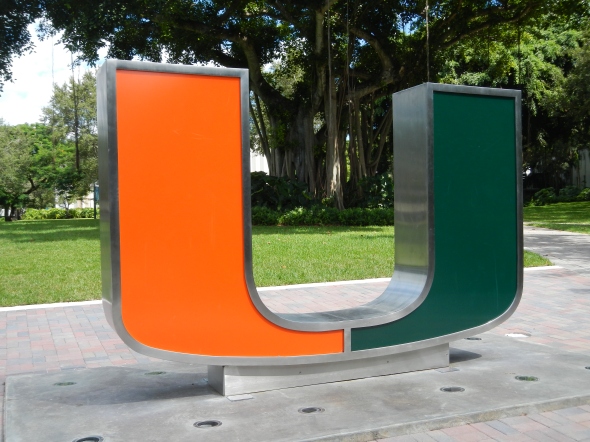 Here I am at “the U” (how people refer to University of Miami) for today’s sessions at ScienceOnline Oceans!  The buses picked us up at the hotel and shuttled us all over to the university.  I got the chills when I stepped off the bus and on to the campus – I haven’t been to University of Miami’s Coral Gables campus since I turned in my dissertation and picked up my cap and gown for graduation (wow!).  Although I spent 99% of my time at UM’s marine campus (the Rosenstiel School out on Virginia Key), I was a teaching assistant for the undergraduate geology program for four years, so it was a little bit of a homecoming for me.

The introductory comments for the morning were similar to what I heard at ScienceOnline Climate a couple of months ago, that this conference pulls together scientists, journalists, communicators, programmers, bloggers, etc., to encourage face-to-face conversation to build community.  And it is certainly a global community at this conference, with attendees from 12 different countries!  This is the first oceanography-themed ScienceOnline conference, and as our conference organizers pointed out, there really needs to be more done to “spread the word” of ocean science and marine conservation.

With that in mind, I was off to my first session.

Session 1 – How to make your science sing: the use of short film as a communication tool
The secret’s out: as a scientist today, in a world where environmental problems are ever-increasing, it is no longer sufficient to simply publish your results in scientific journals. The public, as well as funding agencies and fellow scientists, want to understand the broader impacts of your work. In the past few years, short film has become a popular a means to communicate science and conservation efforts. The availability of low-cost cameras and editing software, as well as the use of video as a scientific method, has made it easier to access footage. However, the trick is telling a story that is both interesting and inspirational for a broad audience. Here, films from the Beneath the Waves Film Festival archives will get the discussion going by illustrating different techniques for science communication through film – ranging from video abstracts, to music videos, to personal stories. Come prepared to share your own video experiences and to be inspired.

This session was facilitated by the organizers of the Beneath the Waves Film Festival and started with the role of marine-themed film festivals – for example, if a scientist makes a video on a marine science topic and it is posted only on their laboratory website, who is going to see it?  Film festivals have the ability to showcase and bring the film as well as the science to a greater audience.  We watched some film clips and discussed how films need to tap in to the emotions of the viewer, but not go too far.  Analytics from platforms such as YouTube will let us know how many “clicks” there are to view the video, but how do we know if videos are really effective beyond the number of hits?  This was a tough one to answer, but depending upon the target audience for the video, perhaps just educating the public on something they did not know prior to viewing the video is a good enough start.  Some in the room voiced how analytics are showing them that people will click off a video once there is a “talking head” on the screen, that pretty pictures and a short time frame (not longer than 10 minutes) is the best.  We talked briefly about tools to use to capture video, such as the GoPro camera and field microphones recommended by Transom.  We covered alot of content in just one hour, and I look forward to thinking more about the role of video in my courses and outreach projects.  And who knows – maybe I’ll arrange to host a Beneath the Waves screening and panel discussion at Penn State Brandywine!

After a 15-minute break, it was off to the next session!

Unfortunately, I did not get as much out of this session as I had hoped.  I already knew about checking statistics in Facebook, using TweetDeck and HootSuite for Twitter, etc.  Even though I didn’t get what I was hoping to from this session (I still don’t know how I can track to know I am making a difference), there are always little pieces of information that are useful.  For example, it was great to have a short discussion on Vimeo, since so many of the K-12 schools I work with cannot watch YouTube videos, so I should seriously consider using Vimeo for any new videos I create.  I also liked the short story about Dunkin’ Donuts, how on Facebook they asked people to post photos of themselves with a DD coffee or product, and each week, DD would select a new Facebook Fan each week and use their photo for their Facebook profile photo (this is described on their website).  And how great would this concept be if we could apply this activity to ocean conservation!

Lunch was an excellent buffet with plenty of time to connect with other conference-goers.  I ate quickly and strolled around campus, even walking past the UM mascot Sebastian the Ibis (you never know who you will run in to on campus!).  I went to the UM bookstore to stock up on some UM swag, and the cashier just happened to be from Concordville (only 20 minutes from where I live) and knew about Penn State Brandywine!  Such a small world, students – be proud of where you are from and where you earn your degree(s)!

Another post for the afternoon sessions to come later on….

One thought on “FL – ScienceOnline Oceans, Sat. AM”

Can someone tell me if a tornado hit the PA Turnpike (by Philly) this evening? Wow! This is so scary - we’re on the westbound side, we can drive around the broken branches/leaves, but eastbound is completely shut down with many trees across the road. People are out of their cars trying to move trees. What a storm.
Came across a @shortedition kiosk at @septaphilly Jefferson Station! No one was using it, so while I was waiting for my regional rail train to arrive, I pushed a button to get a printout of a story. Then, four other people printed out stories after watching me! Then, I exchanged my story with someone else waiting for a train. Glad I could ignite some curiosity among those waiting for public transit, and so glad to share with someone else!
My husband got me the perfect birthday card…. Yes, this is me!
OK, one more pedagogical book this summer…. I bought this one years ago when I started bringing reflection activities into my courses. This fall, I’m teaching an online course on climate change. And with all the “changes” students have been through this past year with remote instruction, and changes in policy/political leaders, etc., students need the space, time, and structure to process these changes from the individual-to-global level. So climate journaling for the fall semester it is!
Signs are still up on campus - my mask will be coming back to campus with me this fall, despite the mask mandate being lifted on June 28th.