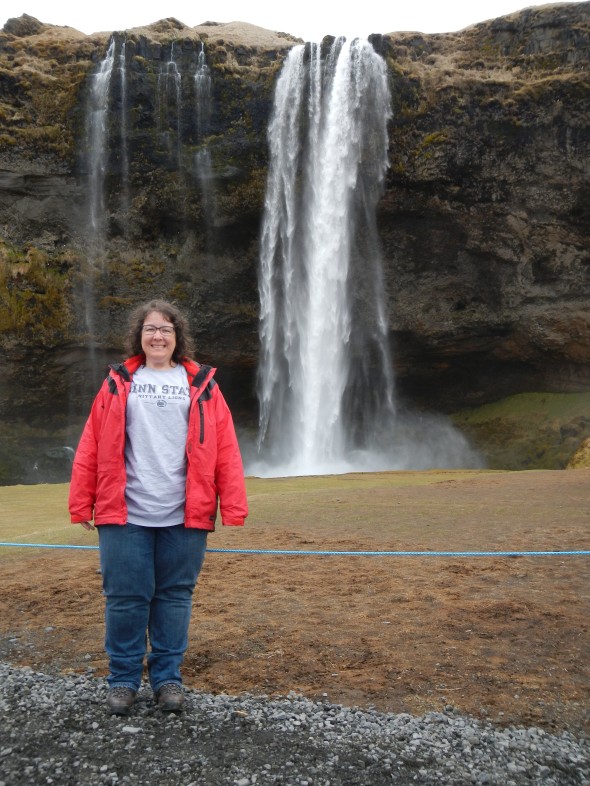 That’s me, right before I walked behind this Icelandic waterfall named Seljalandsfoss, our second stop of the day.

I’ll start with my summary for today – pure amazement, pure exhaustion!  Today was spent traveling along the “Ring Road,” a national road in Iceland that circles around the edge of the island connecting the major populations.  We traveled between Reykjavik and Vik, stopping to view various volcanic landforms and geomorphologic features of southwest Iceland.

Our first stop was to a volcanic feature I had never seen before (except in photos) until today.  The feature is called a hornito, the Spanish word for “little oven.”  A hornito forms on the surface of a lava flow, such as the basaltic pahoehoe flows typical in Iceland.  Visually, it resembles a spatter cone, but a hornito is not connected to a main vent or magma chamber.  This feature forms when high pressure causes lava to break through a cooled surface in a flow, creating a steep-sided object.  We were lucky to find this mini-field of hornitos. 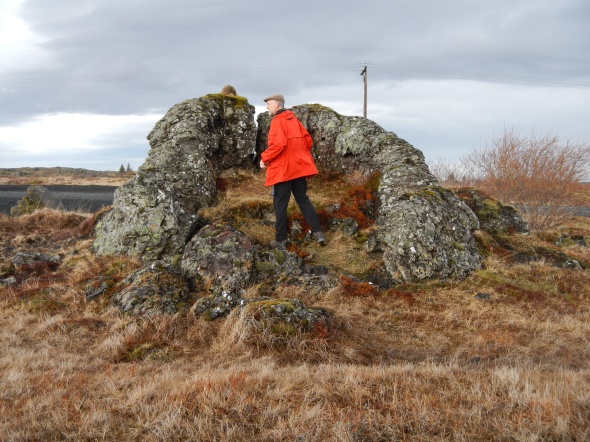 A hornito, with a human for scale! Note the circular depression in the center, marking where the molten material broke through the surface of the lava flow.

Our second stop was to Seljalandsfoss.  This beautiful waterfall allows visitors to walk behind the falls (and get very wet!).  The top of the falls, 65 m (~213 ft) high, marks a former sea cliff.  The valley this waterfall and others plunge down to was once flooded with seawater, as recently as the early time of Viking colonization. 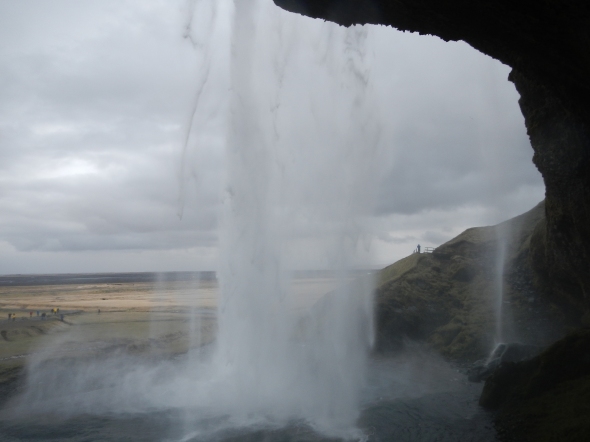 A photo I took as I worked my way behind the waterfall – also thinking that where I was standing was once under the ocean.

Our next stop was to the Eyjafjallajokull Visitor Center.  This stop was not on our itinerary, but we couldn’t resist – we had to stop by and see the video put together by the family that owned the farm across the street.  The video, ~20 minutes in length, did an amazing job capturing what this family went through during the 2010 eruption of this volcano and the local impact on the community.  As many of us have heard about the impact on international flights by Ejya’s eruption, it was important for us to hear about what the effects were literally in the backyard of the volcano. 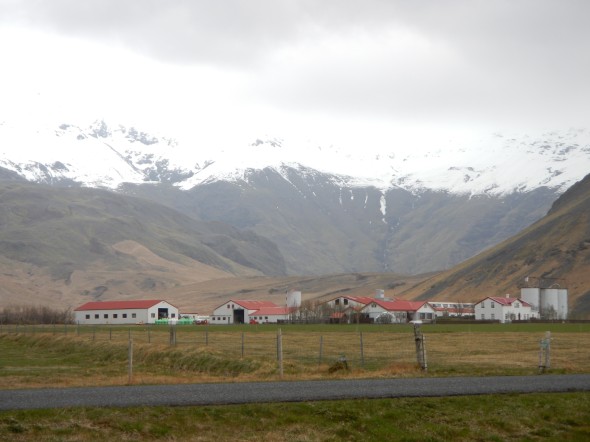 One of many family farms that had to dig out from under the ash in 2010 to continue to survive.

We then continued on to Sólheimajökull, the glacier snout of the southwestern outlet of the Myrdalsjokull icecap.  This outlet glacier is approximately 8 km long and >1 km wide at its broadest.  Sólheimajökull has generally been retreating since the end of the 19th Century, with a recorded 900 m retreat between the years 1930-1964.  The current retreat is ~100 m/yr.  We spent most of our time at this location today, walking on the ice and the moraines.  I took a moment to reflect upon a visit I made to Glacier National Park in Montana a few years ago, and recalling that there are next-to-no glaciers left in that landscape.  I wonder for how many more years people will be able to come and visit this glacier.  Although all of the landforms we investigated today were “cool,” this was by far my favorite.

Looking at the glacier snout known as Solheimajokrull. Can you find the human for scale?  The black “stripes” are layers of volcanic ash trapped in the ice.

Did I say the glacier stop was the coolest stop?  Well, the next stop certainly wins for the “wow” factor of the day.  Yes, everything was impressive, but you don’t get to see columnar basalt formations like this every day!  We stopped at Dyrhólaey, a small peninsula located about 10 minutes from the village of Vik.  In addition to the columnar basalt at the shore, many sea stacks/rock pillars and sea arches were visible offshore.  Photos from this location are included in introductory-level college textbooks when describing coastal geomorphology.  We took a group photo at this spot, and when I have the photo, I’ll post it in my last post summarizing the trip.

This columnar basalt formation will eventually erode through the middle and become a sea arch.

We made two other quick stops and ended the day with another waterfall – this time, the 60 m (200 ft) tall/25 (82 ft) m wide block waterfall of Skogafoss.  Skogafoss is one of the largest waterfalls in Iceland.  You could not walk behind this waterfall, but some of my colleagues climbed the massive stairway to the top.

The final stop of the day – another sea-cut platform that Skogafoss pours over.

We really lucked out with the weather during this day.  It had rained the night before, and it began to rain when we got back to Reykjavik in the evening.  I was extremely disappointed that the thick and low cloud cover today prevented us from seeing Hekla and Eyjafjallajökull.  I hope the weather holds out tomorrow, when we visit a fjord and climb a cinder cone!

I found these amazing fabrics - someone please tell me what I can make with them because I so want to buy them…. #fabric
New #quilt hanging on the front door for #FrontDoorScience on #ClimateFriday! This #MiniQuilt focuses on @projectdrawdown’s Land Sinks sector, with fabrics for bamboo production, perennial stable crops, and tropical rainforest restoration solutions.
Attended Adobe Spark training today with the amazing Carla from @psumediacommons - I keep forgetting I have this app on my iPhone! I thought this sidewalk chalk art in front of Media Elementary School was a great image to annotate.
M 7.0 (20 km depth) from Acapulco, Mexico, as measured on the seismometer at @psubrandywine
Presenting my chocolate drop cookies for #TheGreatRareBooksBakeOff - so much fun exploring historical recipes from rare cookbook collections (and baking cookies for sharing!) #BakePennState @psulibs @psuspecialcollections #cookies #cookiesofinstagram